The Semper Sonnet by Seth Margolis 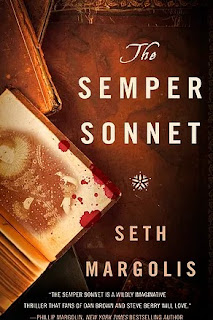 You may remember Seth Margolis' book and the subsequent movie, Losing Isaiah, and he has since published many more novels. In The Semper Sonnet he takes the reader on a wild ride with both a present day and also historical mystery. When Lee Nicholson finds an unpublished sonnet which she believes to have been written by William Shakespeare, she unwittingly becomes a target. After reading part of the sonnet with its hidden meanings on a television show, her life and those around her become endangered. But it isn't just about the sonnet, she uncovers intrigue in the court of Elizabeth I and also a virus that has been entombed for centuries and could be unleashed at any time.