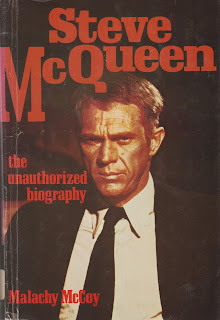 Malachy McCoy's Steve McQueen biography is shown to be unauthorized. As a fan of Steve McQueen's films I was interested to learn more about him and the striking difference between his on screen persona and that of his real character. He was one of the major stars who could demand a high salary, along with a percentage of profits, in his later films. He came from an unstable family, but later enjoyed a family of his own with Neile Adams. (He met Ali McGraw when filming The Getaway and they later married).  The Sand Pebbles, Thomas Crown Affair and Great Escape with it's motorcycle stunts were favorites. An avid racer on both motorcycles and in cars, film makers often worried that their star would be injured and eventually required him to abstain during filming. Despite his life of healthy eating, it wasn't the fast vehicles that caused his death, but cancer at the age of 50.
Posted by Ann Summerville at 5:42:00 AM