The Water Dancer by Ta-Nehisi Coates 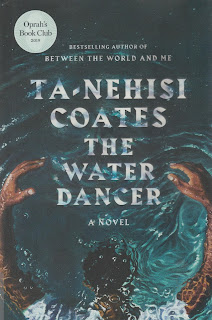 The Water Dancer by Ta-Nehisi Coats is a dramatic story about the life of a slave, the underground railroad and the atrocities inflicted on what he calls tasked workers.

The novel is well written and brings to light the plight of slaves living on Virginia plantations, but even in the north freemen are abducted and sold to southern landowners. Hiram, the main character, also has a confusing life as he is the son of a slave but his father was the plantation owner. The title, Water Dancer, comes from his mother's ability to dance while balancing a water vessel on her head.

There was always a fear of the slaves being sold themselves or losing their children and families. This became an even greater fear as the Virginia tobacco plantations hit on hard times when the soil was depleted of nutrients and minerals and the tobacco crops began to fail.

There is also a thread of magic/mystical power running through the book (referred to as conduction) in which Hiram was able to travel from one place to another supernaturally when remembering certain events - I didn't think this enhanced the story and in some ways spoiled it. Hiram also connected with Moses/Harriet Tubman who was showed as also having the gift of conduction.

You can read an excerpt here