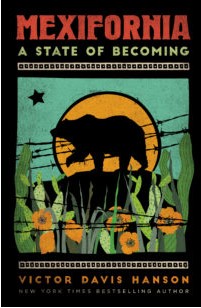 Victor Davis Hanson has his finger on the pulse of America and is able to explain current events with remarkable insight. Many of his Hoover Institute interviews relating to his books are available on You Tube.

Professor Hanson grew up in a generations old farm in California not far from Fresno. While his family had always been surrounded by immigrants from India, Italy, and Mexico, they worked together as a community, helping each other and encouraging assimilation into American society. What he has found now is that so many illegal immigrants bring with them what they purport to be escaping from: gangs, drugs, criminal activity. They have no respect for property and farmers are constantly trying to repair fences and damage done to crops, vandalism and break ins (he goes to local swap meets to buy back his stolen farm equipment) and the manufacture and distribution of illegal drugs. With their income in cash, they are actually making more money than minimum wage that has tax and other deductions taken from a citizen's pay check. But carrying cash can also be a problem from the illegal Hispanics as they are more likely to be robbed.

Mexico is happy to see their poorest citizens leave and send billions of dollars back to Mexico to support families there increasing their GDP while lowering ours.

Crime is exploding and over 25% of inmates are from Mexico. And hospitals are underfunded and overcrowded with people here illegally without health insurance or funds to pay health care costs. They bring with them a myriad of diseases such as whooping cough, tuberculosis, hepatitis and venereal diseases.

Hard labor on the farms wears men out by their 40s and 50s leaving them to be supported by government assistance. Men often have two families to support, one in the U.S. and another in Mexico.

With encouragement from the activists wanting liberal votes and the capitalists who want cheap labor, there is little hope to change the situation. By 2050 it is estimated there will be 97 million Hispanic people here illegally.