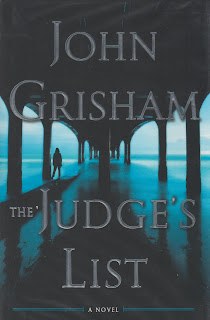 John Grisham is a master at turning legal investigations into thrillers. The Judge's List is no exception.

The story follows Lacy Stoltz (from The Whistler) who works for the Florida Board on Judicial Conduct. After being approached by a woman who claims a judge has killed her father, along with many other victims, Lacy's team begins investigating, finding more unsolved murders across the country. With more than one under her jurisdiction in Florida, she cannot turn a blind eye to the crimes and soon finds that the killer is not only a judge, but he has been compiling a list for decades of those who have wronged him in some way.