The Winter Palace by Eva Stachniak

The Winter Palace by Eva Stachniak begins when Catherine the Great is first brought to the court of Russian Empress Elizabeth.

The young princess Sophie of Prussia spoke neither Russian, nor French (the chosen language for nobility) when she first arrived and her mother was of little help as to the ways of the Russian Court. The treacherous Empress Elizabeth (daughter of Peter the Great) soon changed the young girl's name to Catherine and groomed her to become the wife of Elizabeth's nephew and heir. 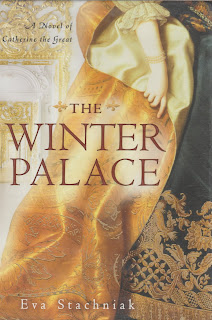 The story is told through the narration of a book-binder's daughter, Varvara, who is taken in by Empress Elizabeth when her parents died. She is recruited as a court spy and with her access to all areas of the palace she becomes a friend and confidant to Catherine.

Choosing a spy to tell the story, gives the reader an inside look at all areas of the Russian court. Catherine had very little recourse against Empress Elizabeth who took Catherine's children away as soon as they were born and gave her access only for a few minutes less than ten times a year. Although Elizabeth is painted as a vain and vicious woman, she has also been known to bring about The Age of Enlightenment in Russia. Balls and masquerades were her passion and when she died she left behind 15,000 dresses (other dresses were passed on to her ladies' maids during her lifetime).

Catherine and her husband had little affection for each other and she amused herself with lovers. During most of the book Catherine is despondent in her rooms and has very little contact with court life.

I found so many characters confusing as they were referred to with both names and titles. It wasn't until I reached the end that I found a list of characters in the Russian Court, which would have been more helpful at the beginning. Even so, not everyone is listed there and the descriptions are sparse for each character.