Notes from a Small Island by Bill Bryson 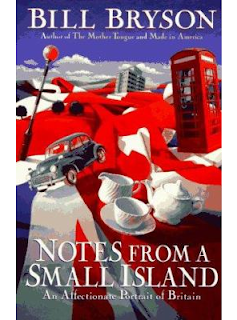 Notes from a Small Island is written with Bill Bryson's usual derogatory remarks and witty sarcasm. He has carved out six weeks for his trek around Britain either walking or taking public transport (and occasionally, with reluctance, renting a car). His reasoning is that if someone can walk from Lands End to John O'Groats (the length of Britain) in eight weeks, surely he can accomplish it in a shorter amount of time using the addition of trains and buses.

He reminisces of his first visit to England in the chaotic times of 1973 (A time I remember well). Unemployment was high, those with gainful employment were limited to working three days a week, gas/petrol was rationed, it seemed everyone was on strike, VAT (value added tax) had been introduced for most purchases, and it had only been two years since decimal currency had replaced pounds, shillings and pence. To add to the instability, Britain chose to join the European Common Market which skyrocketed the price on many products. Lamb, which had once been a fairly cheap meal from New Zealand, now was out of the reach of many.

He starts his trek twenty years later at the white cliffs of Dover and winds across the south coast of England before heading northwards, through the industrial midlands and on to Scotland.

Along the way he describes locals, architecture, historical places and things he learned from patrons over an occasional beer at a local pub. He stops at Saltaire where a mill owner built a town for his workers, found an ancient Roman mosaic floor in a field (which turned out to be a Victorian replica), wandered the beautiful south coast beaches, and left many cities amazed at the lack of planning for hideous new construction and nonsensical thoroughfares.

He refers to the British as easy to please and their pleasures small. When presented with a small pleasure such as a tea cake, scone, or biscuit (which he adds are very flavorful) they respond with "Oh, I shouldn't really," before being encouraged and agreeing to the indulgence with "Just a small one, then."

Other remarks he comes across frequently are: "Mustn't grumble," "Makes a change," "You could do worse," "It's not much, but it's cheap and cheerful."

All in all I enjoyed the book - a walk with him down memory lane of conversations that were common when I was growing up and the peace and tranquility of a walk on the moors or on a deserted beach in the winter. I wish he had ventured into Cornwall though where the Lands End to John O'Groats walk usually starts. He would have enjoyed the picturesque fishing villages.

Note: He adds a glossary in the back to refer to.
Posted by Ann Summerville at 12:30:00 AM