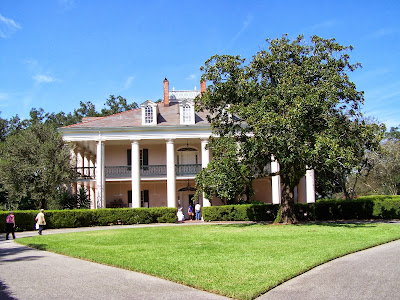 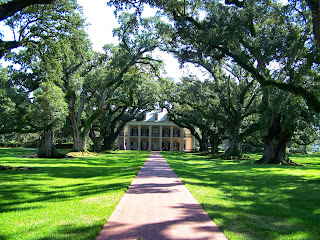 Oak Alley, originally named Bon Sejour (good living) was my favorite plantation of our visit to Baton Rouge. (It could have had a lot to do with the mint juleps served on the porch).


The Plantation is named for the row of three hundred year old oaks lining the entrance to the house. The trees were planted long before the house was built and provided a natural wind tunnel, forcing the Mississippi river breeze toward the plantation house.
Once affording river views, and although the house is built on the highest point of St. James Parish, the high levee now prevents sight of the Mississippi from the house.
The house itself is magnificent and has been restored along with six original slave quarters, called Slavery at Oak Alley,where the entire history of slavery is covered. 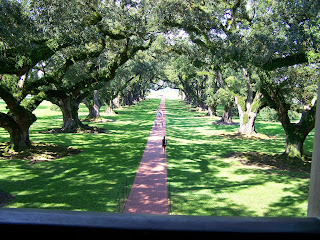 Like many of the plantation homes along the river, Oak Alley fell into disrepair until Mrs. Josephine Stewart (from the Armstrong Texas ranch family) purchased the property in 1925 for $50,000. She spent a further $60,000 renovating the house and grounds and although members of her family are still actively involved in maintaining the property, it is owned by Oak Alley Foundation, formed shortly before Mrs. Stewart's death.
Many film makers have chosen Oak Alley as a setting. You can read the full list here. 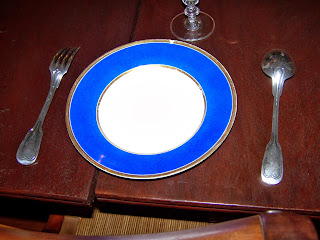 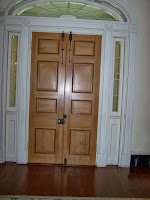 Like many of the plantation homes, very little furniture remains, but period pieces have been acquired. Only the lavender room remains as it was when the Stewarts lived there. Most of the other pieces were brought in to represent life in the 1800s. Faux marble and faux wood designs are on the doors and fireplaces to resemble something more affluent than the cypress wood used to build. It was important for plantation owners to show their wealth and the larger the wealth, the larger the table silverware which was placed down facing on the table to reveal the family crest on the back.

If you plan a visit, stop by the restaurant (attached to the gift shop). Their meals are delicious.

wow - I'm planning a trip to LA per your plantation tour. This looks absolutely "gone with the wind" type. Plus mint juleps are a bonus. Lovely post and thanks for the tour